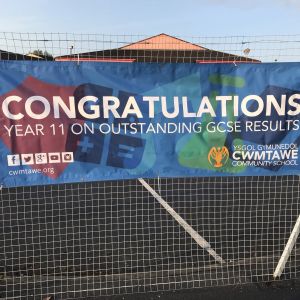 Our Year 11 pupils are celebrating the school’s best ever results. More than eight out of ten pupils achieved five good GCSEs or equivalent in this summer’s examinations, building on several years of continued success.

The results include some exceptional achievements including:

Karolinka Barakova achieved 5A*, 5A, 1B having moved to Wales from Slovakia less than eight years ago and has invested considerable time developing her grasp of the English and Welsh language. It certainly paid off as she’s achieved A grades in both languages. It has been a remarkable year for her as she also played for the Wales volleyball team in the 2018 European Championships.

Talented rugby player Billy Moxey celebrated being selected to the Ospreys Under 18s rugby squad and achieving 7A* and 5A grades.

Twins Chloe Mills and Leonie Mills celebrated 11A*s and 9A’s between them.

Amy Brown overcame some significant health issues and spent time in hospital immediately before the exams. However, she was determined it wouldn’t hold her back and went on to achieve 4A*, 7A and a B. Amy has made a tremendous contribution to the local community, volunteering with Neath Port Talbot Youth Council. She amplifies the voices of young people, attending monthly meetings, training events, consultations and cabinet meetings at the Civic Centre. Nationally, Amy was elected as the Youth Member of Parliament for Neath Port Talbot. Amy also volunteers with the Abertawe Bro Morgannwg University Youth Group and contributed to the development and launch of the Children’s Rights Charter.

Delighted headteacher, Mr. Lee Hitchings, said “Pupils, staff, governors and parents are celebrating today. The outcomes achieved by pupils this year are excellent and I am very proud of every one of them. Today is the pinnacle of five years of hard work for the pupils and their families. They truly are well deserved.”

“These results reflect the quality of education offered by Cwmtawe at the heart of the Swansea valley. I have no doubt that parents will be very proud of our young people’s achievements and we wish pupils well as they embark on the next stage in their education or their chosen career.”