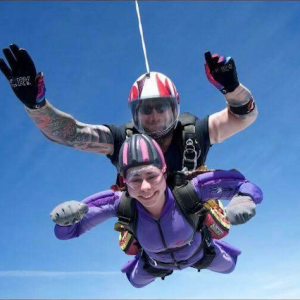 During the summer, Year 11 pupil Amy Brown took part in a charity skydive for type1derful, a diabetes charity which is part of Diabetes UK. She has already raised in excess of £3,000.

In addition, Amy recently achieved 4A*, 7A and 1B in her GCSEs, demonstrating her resilience despite this serious condition. She has made a tremendous contribution to the local community, volunteering with Neath Port Talbot Youth Council. Nationally, Amy was elected as the Youth Member of Parliament for Neath Port Talbot. She also volunteers with the Abertawe Bro Morgannwg University Youth Group and has contributed to the development and launch of the Children’s Rights Charter.

If anyone ever thinks Diabetes will hold them back, Amy's achievements should be a reminder that it doesn't need to. She has been a true ambassador throughout her time in Cwmtawe and we're all immensely proud of her.